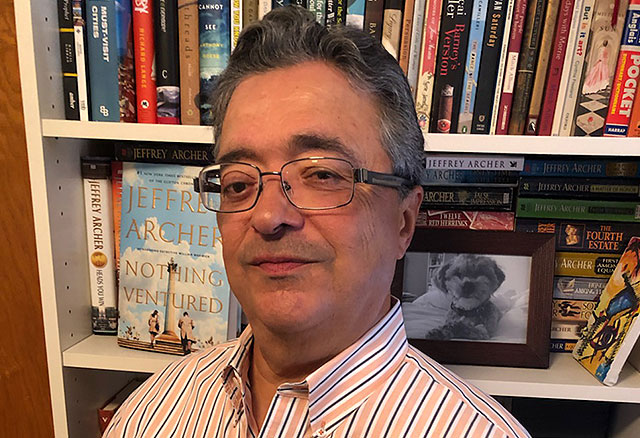 Sebastian Villani doesn’t seem like a man on the doorstep of retirement. After 47 years as a teacher, his interest and passion for the calling seem just as ripe as someone starting out. However, after almost a half century and some 15,000 students later, he’s hanging up his skates.

Mr. Villani’s career started when he was just 22 at a Catholic English Junior High School in St. Leonard, and ended recently at the English Montreal School Board’s (EMSB)  Laurier Macdonald High School, where he had been teaching for the last 33 years.

Some time ago, he was speaking with a colleague and admitted he had never “sent a kid to the office.” This remained true right up to his last day, and it’s testimony to what he feels was capturing his students’ attention and creating engagement in the classroom so that disciplinary measures were never needed.

It all started when Mr. Villani and his family left Italy for Canada when he was just  eight years old. He recounts –  with deep nostalgia, even after all these years – that on his last day of school, as he was walking away, he turned around to take one last look at his school, set against a stunning backdrop of the Adriatic Sea and an orchard. “I realized how much I was going to miss this great teacher, Mr. Innarino, and all my classmates. Right there and then, I said to myself ‘I want to be like him. I want to be a teacher.’”

After studying history at Concordia (at the time Loyola), he was asked by an administrator if he would consider going to law school. He applied, was accepted and scheduled to start, and though, he recalls, “it would have pleased my parents,” he declined the invitation. At the time, he was working at a clothing company and had lawyers as customers, but despite the promise of a lucrative and interesting career in law, he was determined to try teaching, he recalls.

He changed course and attended McGill, where he received his teaching diploma.

“From the moment I walked into a classroom, I said ‘this is for me.’ I did a vertical leap on my first day. Like a little a bird, I jumped up, and said ‘I’m here!’ And it’s been love ever since.”

In his classes, topics included world religion, justice, fair trade, food waste and civic rights. With this kind of subject matter, he could mix it up, and was proud to say that the game he invented in 1978 – something he called “stairway to heaven,” which was based on Snakes and Ladders – was used right up to his last semester.

The courses he taught at Laurier Mac lent themselves well to discussion and conversation. Most recently, Mr. Villani led the classroom in Ethics and Religious Cultures. Over the duration of his career, other topics were moral education, career choice education, personal and social education, world history and economics.

What is the most noticeable change he’s witnessed since starting teaching? In his early days, “Whenever I asked a question, 60 hands went up,” he said about the 30 students in the class. “You would mention a skiing field trip, and there was so much excitement there were tears.”

With devices now figuring so prominently, you have to work harder now to get their attention, he said. Students now are “more in tune” and more informed. He made up lesson plans that not only engaged them but himself. “They saw that I loved being engaged.”

His classroom was a “sacred” space, and kids felt “happy and warm” there, he said. After the 2006 Dawson College shooting, some of his former students told him, “I want to come back to the nest.”

Mr. Villani said he always wanted each student to feel special. “Each kid is [so-and-so] Villani,” he said. And when it comes to the type of language that could be heard in his class – a topic often discussed among colleagues – he believed that because he himself only used civil language, his students were compelled to do the same.

Some of the challenges he feels are faced by teachers in public schools is “too much paperwork” and managing the growing involvement of parents, who, he said are not all giving their support to teachers. There’s more complaining, he said. Some think there is too much homework, some not enough. “You can’t win.” He likes the model of parent involvement in some schools, where they volunteer in specific aspects of school life.

Though he has worked beyond when he could have retired, Mr. Villani had some ideas of how he will spend his time. He used to be invited to speak to small groups of first- or second-year students in teacher’s college. Most hadn’t been inside of a school classroom since they were students themselves, and he enjoyed enlightening them to the realities of a classroom. He said he may like to continue this service but also has been interested spending time with old people who lack social visits. “I feel a calling for that,” he said. Also, he has been enjoying golf because of its health benefits and the physical distancing it allows during the pandemic.

It was much easier before to be a teacher, even though the pay was so low, he said. He recalls telling some of his younger teacher students: “If you are doing this for the money, leave now. If you are doing this because you like the job, leave now. The only way you are going to do well is if you love this job…Students have an innate sense of knowing that you want to be there, and that you love them.”

Sep 08, 2022
EMSB Open Houses Return to In-Person Format
Both elementary and high schools across the EMSB are...
Read More

Aug 31, 2022
On behalf of the Directorate
All EMSB school personnel have been eagerly awaiting the...
Read More