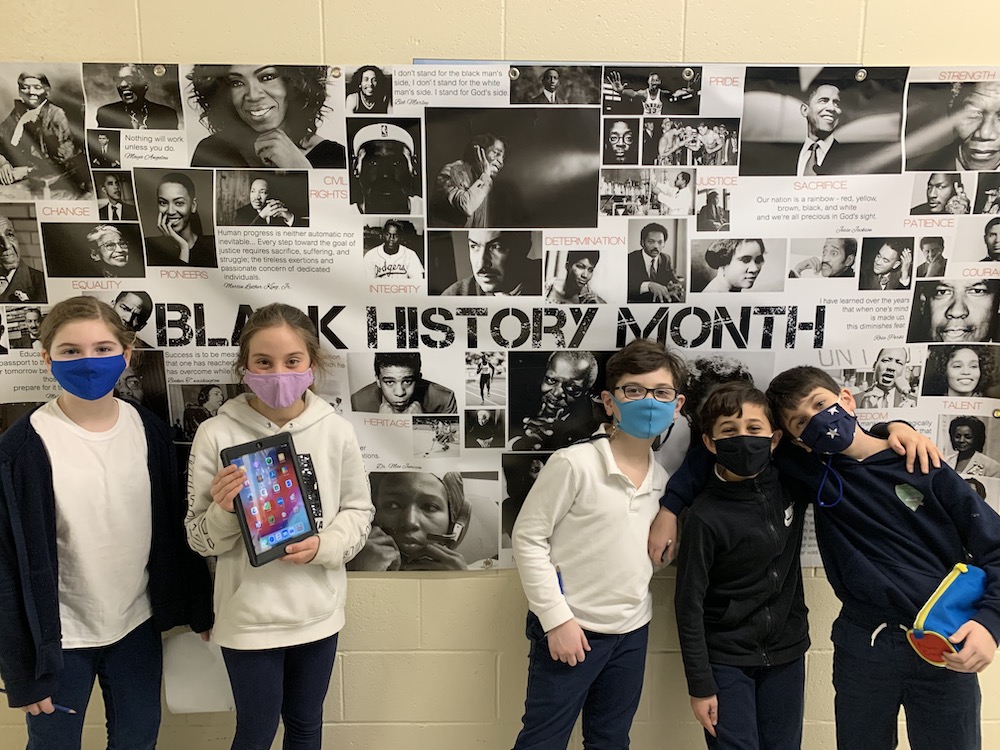 The English Montreal School Board marked Black History Month in February across its network.

This was the first time schools with the EMSB  could access a specially created Black History Month Unit to use throughout the official Black History Month in February – and all year long. Designed by the board’s Spiritual and Community Animation Service (SCA), the material was designed as an entry point into a conversation about Black history, where students and teachers could engage in stories and videos about Black Canadians, through the lens of character strengths, and take part in activities that encourage reflection on identity and representation.

“The feedback from the animators who implemented the unit was very positive,” said Danika Swanson, Spiritual and Community Animation Service Consultant. “Teachers and students alike appreciated learning about the purpose, importance, and history behind Black History Month, as well as learning about the challenges and accomplishments of historic and contemporary Black Canadians. Students explored character strengths and aspects of their own identity, as well as those of the figures they were learning about. We look forward to expanding on this foundation going forward.”

Grade 9 teacher at Westmount High School, Melissa Bergevin said “‘The Identity Workshop’ section gave students perspective on their place in the world, and others,” she said. “It provided an opportunity to practice empathy and for some to become aware of their power and privilege and how to use that to benefit the community around them.”

Samantha Page Smith, Spiritual and Community Animator (SCA) at Westmount High School, Pierre Elliott Trudeau, St. Monica, and John Caboto Academy, said teachers and students “really enjoyed the unit” and “talked about which identities were visible and which they felt held privilege.” She said at the high-school level, the focus was on identity, and in elementary school, a Black History Month presentation was tied to a video on character strengths.  She utilized the SCA unit, focusing on identity at the high school level, and character strengths in elementary schools.

Here are some of the other ways SCAs highlighted Black History Month in schools. 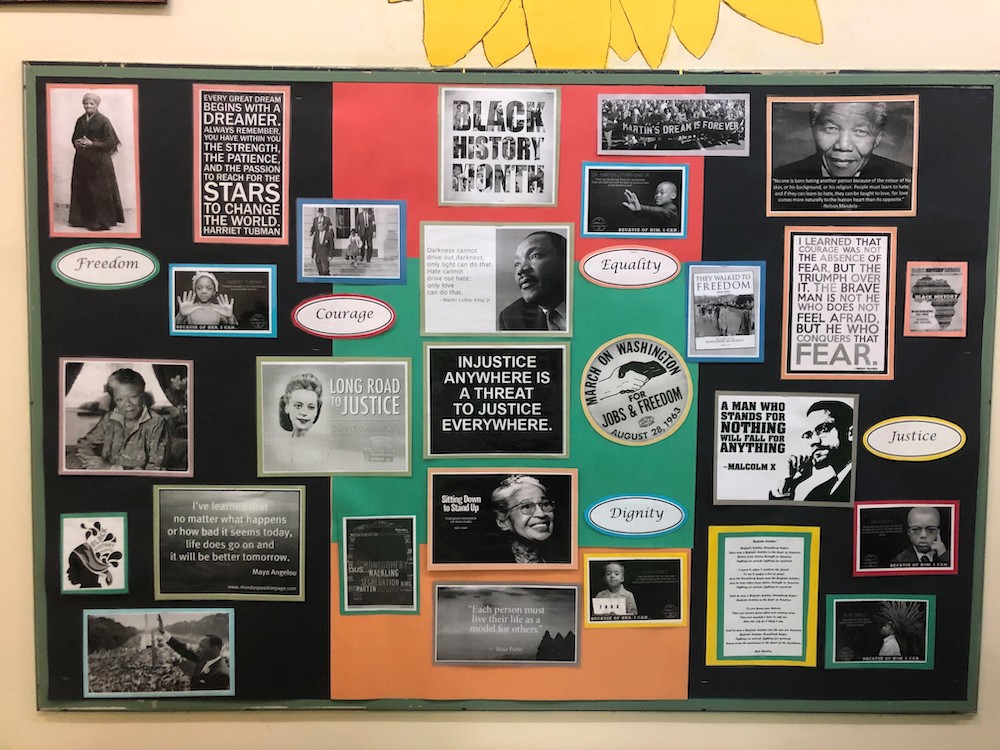 Linda Luca, Spiritual and Community Animator at Merton Elementary School in Côte St. Luc and Willingdon Elementary School in NDG, gave classroom presentations on significant historical figures and events that led to change and continue to inspire progress. She arranged for Malik Shaheed (“DJ Malik”), as part of the Youth Stars Black History Month Tour, to give a virtual presentation on February 25 to the senior grades at Willingdon.

Ms. Luca also created bulletin boards displaying people fighting for civil rights. “It is the courage of those beautiful people, the excellence that they have shared with the world, and the passion that they continue to inspire in others that I wished to highlight with  the boards,” she explained.

One she created for Merton featured Amanda Gorman, a 23-year-old Black writer and poet, who is the youngest person in US history to deliver a poem at a presidential inauguration.

Special guests invited by SCA Puynung Choy marked a special in-house assembly for the entire school at Dunrae Gardens Elementary School in the Town of Mount Royal on February 11. Yona Claude and Junior Dorsaint presented several types of dance. “They learned that much of today’s dance was invented by the Black community, but it goes as far back to African dances, where even the Charleston and cake dance come from,” said Ms. Choy.

Ms. Claude, a personal trainer with a background in dance, taught students about waacking, described as an underground dance style that originated in L.A. and New York by the Black and Latino communities. She also taught them about house dance. Mr. Dorsaint, dance teacher of hip hop and house, demonstrated some modern hip hop.

In honour of Black History Month, Spiritual and Community Animator Veronica D’Agata visited grade 7 and 8 students at both Vincent Massey Collegiate in Rosemount and James Lyng High School in St. Henry to make a presentation on Martin Luther King Jr., his life story and accomplishments. A reflection activity inspired by Dr. King’s “I Have a Dream” speech followed, with students being invited to write about how to bring forward positive change in the world. “The students truly had inspiring words to bring forth change in many aspects including equal rights, anti-pollution, better health care, and more,” said Ms. D’Agata.

Meanwhile at the elementary schools of Our Lady of Pompei in Ahuntsic and Coronation Elementary in  Côte des Neiges, Grade 3 to 6 students learned about Martin Luther King Jr. through the storybook Martin’s Big Words. Studying the posters created by Ms. D’Agata, students were encouraged to find out more about several key figures in Black history. “The goal is to make students curious about who these people are and what their accomplishments are, in order to start the conversation with their teachers or to research them online,” she said. 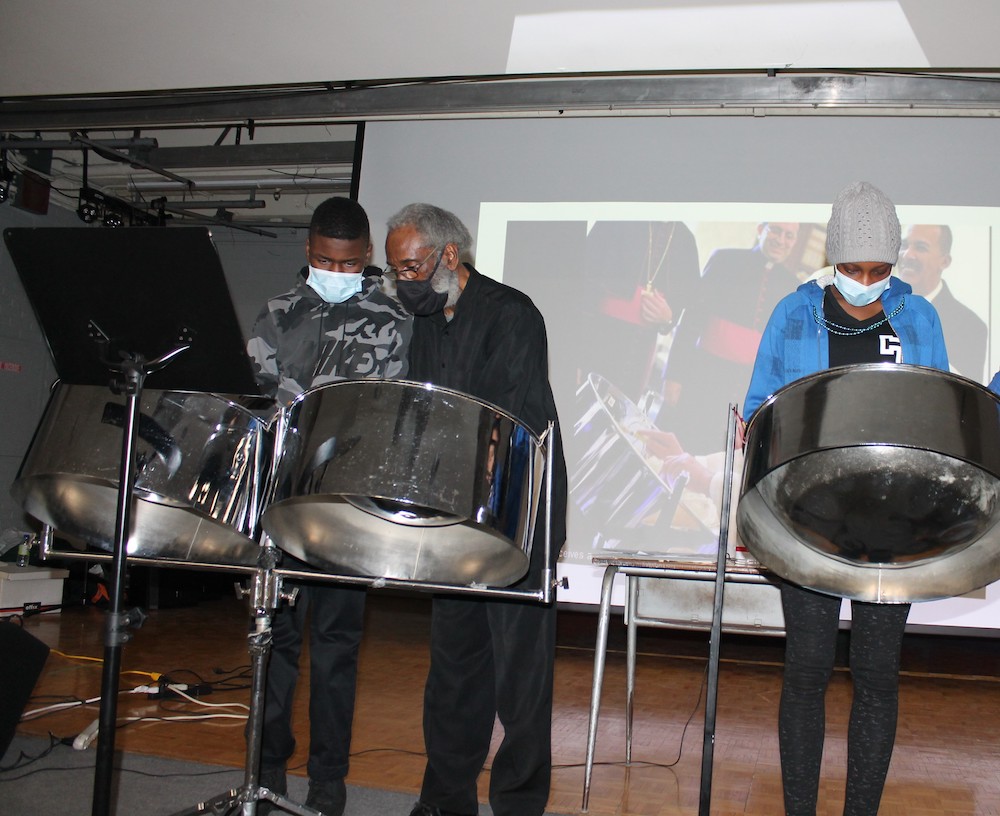 Rocco Speranza, Spiritual and Community Animator at John F. Kennedy High School in Villeray and LINKS High School in Ahuntsic, and elementary schools East Hill Elementary in Rivière-des-Prairies and Edward Murphy in Hochelaga-Maisonneuve, led classroom discussions on Black history in Montreal and provided a presentation on Africville. There was also a virtual visit from special guest Pascal Fleury, a basketball player, who told his story about perseverance in school and sports. Students also listened to gospel music and watched both live and virtual steel pan performances by Dr. Salah Wilson and his grandson Rashiyd Wilson. “Our school communities are really committed and have been involved in the enrichment of our students' experiences and the further learning of many cultures and history,” said Mr. Speranza.

On February 23, LaurenHill Academy in St. Laurent Spiritual and Community Animator Elizabeth Pellicone, hosted a virtual assembly to celebrate Black History Month. The hour-long program included student poetry and dance choreography on themes related to the civil rights movement and Black Lives Matter, a musical performance from the Angelique Francis Blues Quartet, and an Afro dance demonstration by Edwidge Romilus, a teacher at LaurenHill. Special guest speakers covered a range of topics from understanding the Black community's contributions to Quebec history and society with Egbert Gaye, to learning about racial profiling with Alain Babineau, to hearing about the history of Black music in North America and how it is rooted in modern music with Duke Eatmon. Students were treated to Haitian and Jamaican patties catered by Chef Naika at Lombard's Catering and Lloydies' Caribbean Food Catering.

Students at Nesbitt Elementary School in Rosemount and Honoré Mercier Elementary School in St. Léonard received a presentation from Mr. Lacroce on topics of equality, stereotypes, empathy, slavery, the Underground Railroad, and Black Canadian and American heroes. Using devices with QR code readers, students in Cycle 3 took part in an interactive scavenger hunt around the school, which highlighted some of the prominent contributions of the Black community in areas of science, education, music and social justice in Canada, explained Mr. Lacroce.

During Black History Month, students at Laurier Macdonald High School in St. Léonard, Lester B. Pearson High School in Montreal North, as well as Pierre de Coubertin Elementary School in St. Léonard, were provided with age-appropriate Canadian Black History virtual and interactive content created by their SCA, Joseph Monachino. “This content focused on the trail blazers, risk takers and activists who helped to form Canada into what it is today,” he said. Lester B. Pearson students also took part in an interactive media display, where students could scan the QR codes to learn about important figures in Canadian Black history. “These activities served to spread awareness and understanding of the importance of racial equality, diversity and justice,” he said.

Gladys Batten, SCA for elementary schools Elizabeth Ballantyne in Montreal West and Roslyn in Westmount, as well as Elizabeth High School in Ville Émard, focused on in-class experiences using the themes of “welcome” and “courage” to discuss the achievements of historical Black Canadians and contemporary Black Quebecers, and the importance of racial equity. She told the story of historical figures, John and Mildred Ware, and about her friend, Stephanie Roberts, a contemporary Quebec poet. At Elizabeth High School, students watched the Black Theatre Workshop’s reading of Lydie Debuisson’s play Sanctuary.

LINKS High School teacher Gail Berntein said students in the Competency-Based Approach to Social Participation (CASP) class learned about the life and legacy of Martin Luther King Jr. during Black History Month. They were “inspired by the impact that Martin Luther King Jr. had through his peaceful protests.” Homeroom teacher Loredana Scotto and classroom attendants Teresa Mayne and Yi Xia guided students in creating a collective art piece to celebrate the “I Have a Dream” speech. While listening to music from different Black artists, students coloured stencils that were then assembled to create a larger-than-life image.

Since the start of the school year at Park Extension’s St. Raphael Elementary School, “students have been engaging in meaningful discussions as it pertains to Communities Cultures and Contributions,” a school-wide initiative created by teacher Jasmin Skerritt. The aim was to get the students familiar with their own cultures and those around them in their classrooms. During Black History Month, students and staff engaged in sensitization and visual presentations based on what they had been learning throughout the year. They also wrote poems and stories, including Efecan Kavourras, grade 6, who loves to write. “His piece was the result of many conversations that we have been having with the class about Black history awareness and the many challenges that Black people encounter,” said Ms. Skerritt.

For the second year, FACE students in Grades 8 to 11 were treated to an online presentation from Ana Escrogima, Consul General at the US Consulate General in Montreal, and her staff, in honour of Black History Month. The event was organized by Simone Nichol, a teacher at FACE. Consulate General staff member Ellen Wilson spoke about the history of desegregation of schools in Virginia, specifically describing the Farmville student protest, which had ties to Brown v. Board of Education (1954). “The students had an opportunity to understand how important the arts have been as a means of communicating key political issues of the day for the Black Community. It was a fascinating exposé,” said Principal Marilyn Ramlakhan.

Irini Margetis, principal of Mackay Center School/Philip. E. Layton School in NDG, said cycle 2 and 3 classes at Mackay had discussions and read books about the civil rights movement. “We also talked about how we still need to fight against racism and for equality in 2021.” Students in senior grades made posters of Martin Luther King Jr., Ruby Bridges, Rosa Parks and Barack Obama. “Our hope is that these posters will spark conversations and interest across all grades,” she said. 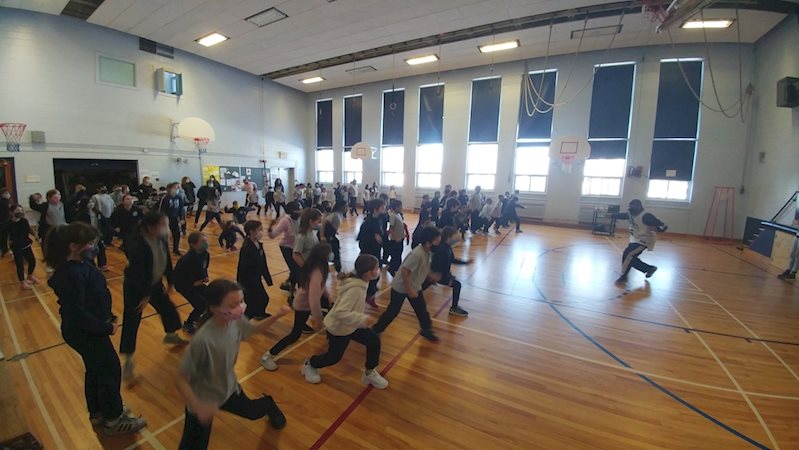 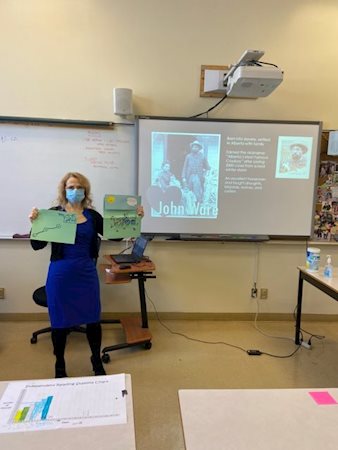 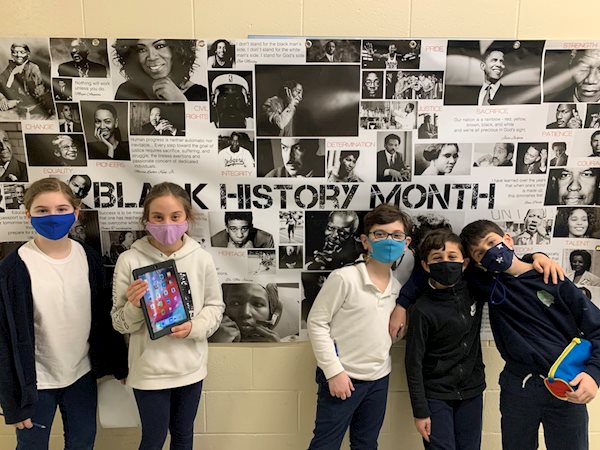 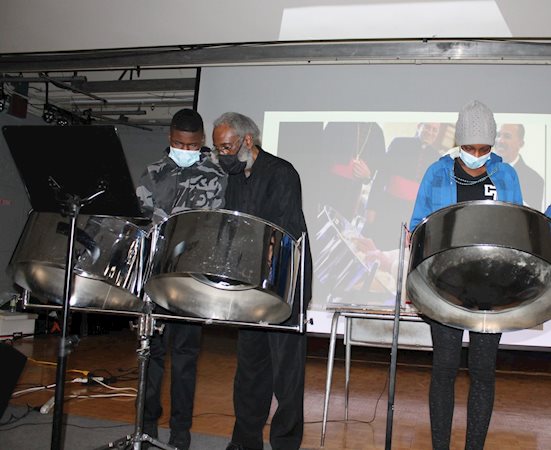 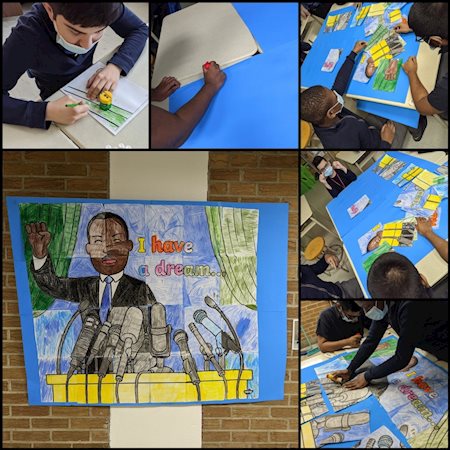 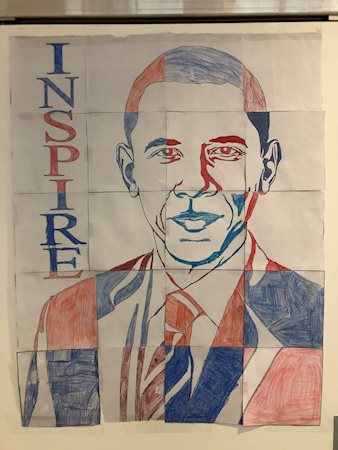 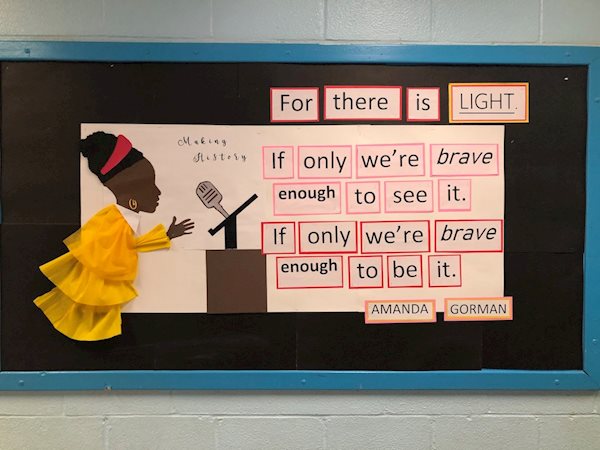 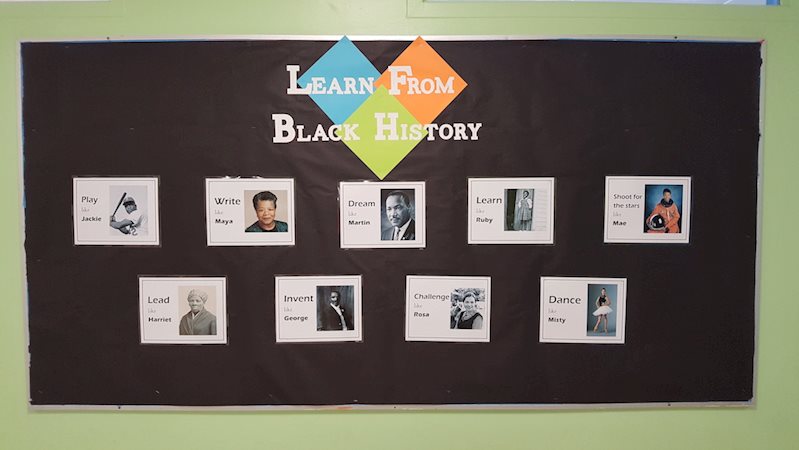 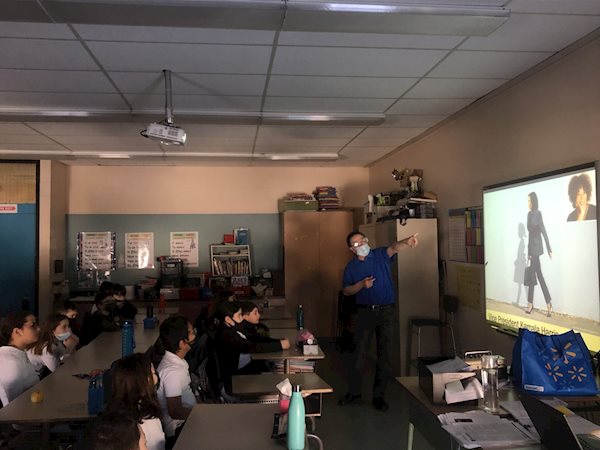 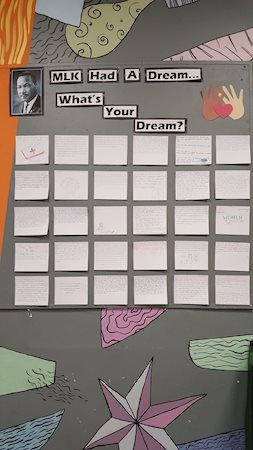 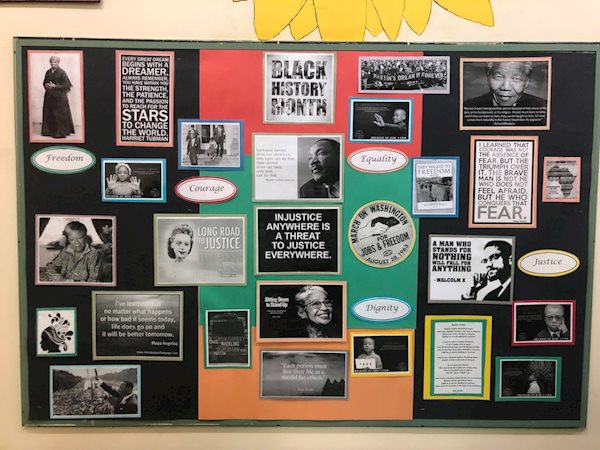