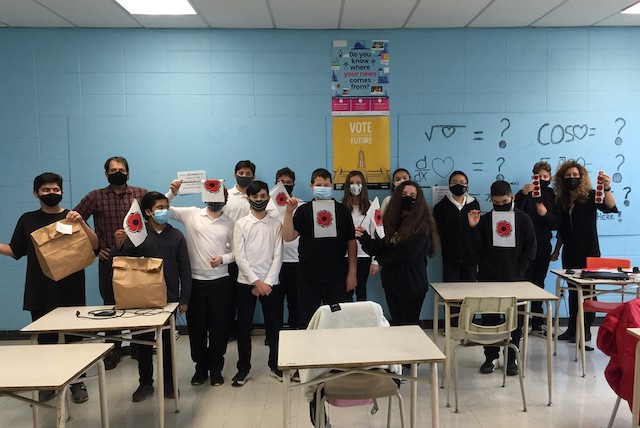 Involving young people in Remembrance Day ceremonies is a way for them to remember veterans and understand the service of Canada’s military, says English Montreal School Board Spiritual and Community Animator Rocco Speranza. He is spearheading the “Pass the Poppy” project as a creative and safe way during the pandemic to show support for veterans and people serving in the armed forces, with the aim of bringing the EMSB community together. It was an idea that came up in collaboration with No Stone Left Alone, a Canadian initiative to remember people who died in war, where Mr. Speranza volunteers.

Without the possibility of gathering in school-wide assemblies this year, the EMSB community can connect in a unifying Remembrance Day initiative. “The idea is simple yet impactful,” explained Mr. Speranza.

Several students spanning different grades from a number of EMSB schools took part. In a symbolic gesture of receiving and giving, the students were filmed receiving a poppy, pinning it, and then “passing it on” until it was received in the final clip by Interim director general Evelyn Alfonsi. https://youtu.be/E3IYxb0-Nrw

“There is a great importance, now more than ever, in taking the time to remember and support the national Poppy Campaign and to commemorate Remembrance Day,” said Mr. Speranza. “Just because we are in a pandemic doesn’t mean we should not take the time in our own way to remember those who have made and continue to make the ultimate sacrifice for our freedom and democracy. We wear and pass the symbol of remembrance from school to school. In this way, we pay homage to our Canadian Forces members – past, present, and future.”

Listen to our podcast with JFK High School students: https://soundcloud.com/englishmtlpodcasts/john-f-kennedy-high-school-honours-our-veterans.

Students from John F. Kennedy High School in St. Michel and Royal Vale School in NDG will be exploring a book in class written by the daughter of a veteran, who will join them by videoconference. Roslyn Franken will read from her book Meant to Be: A True Story of Might, Miracles and Triumph of the Human Spirit, which tells the stories of both her parents, who miraculously survived World War II.

At Michelangelo Elementary School in RDPl students from all grade levels, including pre-K, will take part in a school-wide assembly via Microsoft Teams. Spiritual and Community Animator Mary Poullas is planning to give a short speech about why Remembrance Day is important, and students will recite “In Flanders Fields” by John McRae. A poem written by a Grade 6 student, “Why Remember,” will also be shared with others in the school. Students will sing the national anthem, followed by holding a moment of silence.

SCA Samantha Page Smith said the elementary schools, St. Monica in NDG, Pierre Elliot Trudeau in Rosemount and John Caboto Academy in Ahuntsic, will hold five-minute ceremonies at 11 am, and teachers can also access a virtual Remembrance Day program she created in Google Classroom. Teachers can choose from different options, including holding a moment of silence, reading from a story book, watching either the Memory Project live stream ceremony or a video of a veteran sharing a personal anecdote.

Students at JFKHS will be taking part in creating a mural “Faces Behind our Freedom,” paintings of faces of World War II soldiers and Canadian Forces members who lived in Montreal, including an alumni who served in a humanitarian mission in Haiti, retired Corporal Gianni Segreti.

At Westmount High, the school is transforming its traditional ceremony into a Google Meet version, which all classrooms will livestream. From home, Secondary V students will read the names of the WHS alumni who died in World War I and World War II, while a Secondary 1 student will lay a wreath in the lobby. Virtual addresses will be made to students from a special guest veteran, along with senior administrators as well as Ms. Page Smith, the school’s SCA.

Students at Vincent Massey Collegiate in Rosemount commemorated Remembrance Day with a beautiful arrangement of poppies in their school yard, symbolizing Flanders Fields and the sacrifices that were made by the soldiers. In school, "a heartfelt speech was given by Spiritual Animator, Veronica D’Agata," said Principal Franca Cristiano. Students also took a moment of silence and listened to a student recite In Flanders Fields over the intercom. "Staff members, as well as students, all took that moment to reflect on the high price that was paid to have our freedom, and how lucky we are to live in Canada," said Ms. Cristiano.

Joe Monachino, a Spiritual and Community Animator at Lester B. Pearson High School in Montreal North and St. Leonard’s Laurier Macdonald High School and Pierre de Coubertin Elementary School, says students will engage in school-wide assemblies to remember and reflect upon the importance of Remembrance Day on November 11 at 11 am with an “engaging and empowering virtual ceremony.” Separate videos have been created for the elementary and secondary levels. Some of the elements include standing for “O Canada,” listening to a veteran, observing a minute of silence, watching a reading of “In Flanders Fields” and Terry Kelly’s “A Pittance of Time” and virtually exploring the Memorial Chamber in Ottawa. “It is the goal of this virtual experience and presentation to empower each student to realize the true gifts of peace and freedom,” he said.

St. Raphael Elementary School in Park Extension will be treated to a live piping ceremony outside the school by the Black Watch on November 11, said Puynung Choy, the school’s SCA. She also described an innovative Remembrance Day activity that took place in one Grade 1 class at Dunrae Gardens in Town of Mount Royal: students learned about the rugged experiences of soldiers in wartime, as well as about the animals who accompanied them. “It was a story-telling narrative yoga experience,” she explained. The students practiced a soldier pose, the bridge pose for the “soldiers on the bridge,” the river pose for the “soldiers who walked through rivers,” and cat and dog poses, to portray the animals whose role may have been to use their sense of smell to alert soldiers about enemies.

Vince Lacroce, Spiritual and Community Animator at Nesbitt and Honoré Mercier Elementary Schools in Rosemount and St, Leonard respectively, and Rosemount and Perspectives I and II High Schools, created “360 in 60,” a virtual, interactive Remembrance Day commemoration whose aim is to look at all angles of the Canadian Forces in 60 minutes. SCAs Elizabeth Pellicone, Ibrahim Abou Arab, Veronica D'Agata and Paolo Ruscito are also participating with several of their schools, along with five local military units: The Canadian Grenadier Guards, HMCS Donnacona (Royal Canadian Navy reserve division), 438 Tactical Helicopter Squadron (Royal Canadian Air Force), 2nd Field Artillery Regiment RCA (Canadian Army composed of reserve gunners) and The Black Watch (Royal Highland Regiment) of Canada. Students will have an opportunity to hear testimonials from members of the Canadian Forces about what it was like to provide support during Covid-19, the importance of mental health, and it “will pay tribute to the dedicated, brave, and selfless men and women of the Canadian Armed Forces and Canadian Veterans, past and present, who have made the ultimate sacrifice for our freedom,” said Mr. Lacroce.

Gladys Batten, Spiritual and Community Animator, said the theme of Remembrance Day commemorations this year at Elizabeth Ballantyne and Roslyn Elementary Schools in Montreal West and Westmount respectively and Elizabeth High in Ville Émard is courage and service. “As we focus on veterans and military personnel who sacrifice and serve faithfully and bravely, this inspires us to do likewise,” she said. “This leads us to reflect on the faithful, and often unsung heroes in our community who serve.”

Ms. Batten described a combination of recorded virtual assemblies, partial live broadcasting and classroom visits that students would take part in, all the while respecting physical distancing. Among them would be the showing of a video of soldiers who were called in to work at Quebec’s CHSLDs in April and taking part in traditional readings such as “In Flanders Fields.” Through photos, artwork and poems, “we also want to express the appreciation we have for our local essential service people – in education, food service and particularly in medicine – who must bravely soldier on along during the pandemic,” she said. In one school, this will also provide the context to honour the memory of a senior volunteer who had contributed daily to the lives of students for many years. A trumpet player/piper, who has played in the past for the three schools, will be providing a video recording of herself dressed in uniform performing the special Remembrance Day ceremony comprised of the “The Last Post,” followed by a moment of silence, and culminating with “Reveille.”

Sep 08, 2022
EMSB Open Houses Return to In-Person Format
Both elementary and high schools across the EMSB are...
Read More

Aug 31, 2022
On behalf of the Directorate
All EMSB school personnel have been eagerly awaiting the...
Read More