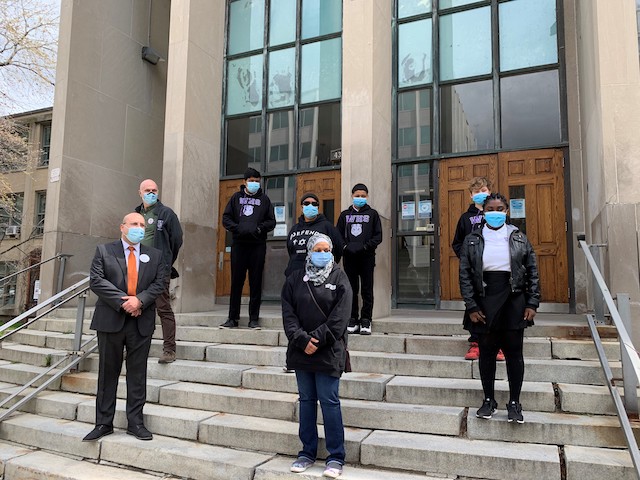 The English Montreal School Board is elated with the Quebec Superior Court’s decision to strike down key provisions of Bill 21, An Act Respecting the Laicity of the State. This decision applies to all English school boards based on Section 23 of the Canadian Charter of Rights and Freedoms.

“Our position has always been that Bill 21 conflicted with our values and our mission and with those of all Quebecers as expressed in the Quebec Charter of Human Rights and Freedoms,” said ‘EMSB Chair Joe Ortona. “Its very adoption was contrary to our societal goal of promoting our peaceful co-existence in a pluralistic and inclusive Quebec.”

The EMSB argued successfully that  Section 23 guarantees minority language educational rights to English-speaking minorities in Quebec, including the exclusive right of management and control of minority language schools. “Section 23 has evolved through the years and successive decisions of the Supreme Court of Canada have recognized an exclusive right of management and control accorded to linguistic minority communities across Canada for the operations of their public school systems,” noted Mr Ortona. “For this reason we urge the Quebec government to refrain from appealing the judgement.”

Today’s ruling stems from October 2019, when the EMSB joined the National Council of Canadian Muslims, the Canadian Civil Liberties Association, individual teachers who wear religious symbols and the Fédération autonome de l’enseignement, a teachers’ union in challenging the validity of Bill 21 in Quebec Superior Court.  Bill 21  came into force on July 16, 2019 and barred public-school teachers, government lawyers, judges and police officers from wearing religious symbols while at work.

The EMSB has seen the negative impact of Law 21 on its staff and on the culture in its schools and centres. The Law is forcing individuals to choose between government employment and a desire to wear religious apparel. “We have had to refuse employment to some qualified candidates and promotions for others,” said Mr. Ortona. “And of course, many have simply not applied.

“Most importantly it sends a message of intolerance and exclusion to our students and their families. We hope that this court decision ends the discussion once and for all for it has already caused significant damage to the careers of many individuals.”

“We value the diversity of our students and staff and respect their personal and religious rights which are guaranteed both by the Canadian and Quebec Charters of Rights,” said Mr. Ortona. “This legislation runs contrary to what we teach and to the culture of respect for individual rights and religious freedoms within English-language schools. Moreover, a religious symbol worn by a teacher in no way affects their ability to provide quality education in a secular state, within a secular education system and in the classrooms of public schools administered by the EMSB.”

EMSB’s challenge to Bill 21 was also based on gender discrimination, prohibited under section 28 of the Canadian Charter. Mr. Ortona added that rather than promoting gender equality, Bill 21 had the opposite effect. “Due to the preponderance of women working in Quebec schools, the law is having a disproportionate effect on them, particularly well-educated Muslim women with university teaching degrees whose role in public life was restricted,” he said.  “Bill 21 was an attempt to solve a non-existent problem, and we are frustrated that the Court did not rule in our favour in this regard.”

“Today’s decision nonetheless is a decisive win for the minority English speaking community of Quebec and Francophone minority communities across Canada,” said Mr. Ortona. “We have demonstrated time and time again during the COVID-19 pandemic how critical it is to have full operational control of our public school system and we are grateful that the Quebec Superior Court has ruled in our favour.”

With a youth and adult sector population of more than 37,000 students, the English Montreal School Board (EMSB) is the largest English public school board in Quebec. Established on July 1, 1998, when the province created new boards along linguistic lines. Our network consists of 77 schools and centres. For more details, visit the EMSB website at www.emsb.qc.ca.