EMSB’s very own play an essential role during COVID-19: its daycare workers 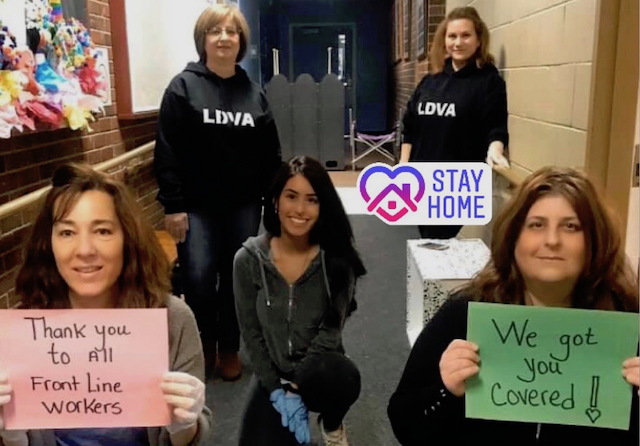 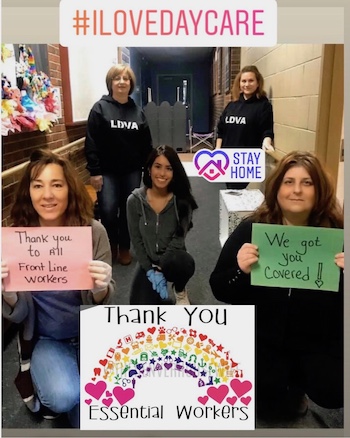 Rainbows adorn the windows of Montreal homes and businesses, with the joint message of solidarity and giving thanks to people working on the frontlines during the COVID-19 pandemic. Healthcare workers, grocery store clerks and others tend to be top of mind, but there are others working in a crucial supporting role behind the scenes – a role that involves interacting in person with others during a time when most can stay at home in safe isolation. This includes many English Montreal School Board (EMSB) daycare educators who have had to leave the comfort of their own homes – in some cases, even their own schools – to take care of elementary school-age children attending the emergency daycare centres that have opened for the parents working in essential services.

Normally a daycare educator based out of Leonardo da Vinci Elementary School in RDP, Ana Maria Di Gaetano is among those who have been given shifts at one of the EMSB schools chosen by the provincial government to house the pop-up daycare centres. Principals from every EMSB elementary school have been tasked with providing a team – comprising technicians, educators and caretakers – to cover shifts at one of the four EMSB-hosted daycare centres: Westmount Park School South Campus (at the former St. John Bosco School in Ville Émard), St. Monica in NDG, Cedarcrest in St. Laurent and Dante in St. Leonard. (Montreal West’s Elizabeth Ballantyne closed its centre due to low enrolment.) A shift is either 7 am to 12:30 pm or 12:30 pm to 6 p.m. and can be split into segments.

Two to three days a week, Ms. Di Gaetano works at Dante Elementary School for a three-hour shift. Despite the anxiety many feel being around others in public because of the highly contagious nature of the virus, she and her colleagues put it aside to come up with a schedule of fun activities each day for the students. They design the activities to respect the physical distancing required between each child and educator, which is challenging with young children, she said. They have gym time, dancing to a video, colouring and other arts and crafts activities. Between each activity, Ms. Di Gaetano says toys are disinfected and children brought to the washroom to wash their hands. She is happy that she has been placed at the same school and is getting to know the children and their parents. "We're doing it for the children," she said.

Among the four principals called upon at the dawn of the lockdown was Joe Schembri, principal of Dante, the only English elementary school in the city’s east end  with such a daycare and situated close to three hospitals.

The Monday following the March 13 lockdown, the emergency daycare centre was up and running at Dante. Fresh off the block as the school’s new principal, Mr. Schembri was just getting to know the employees at his new school. Faced with the task of having to staff the daycare, he was initially confronted with reluctance. His school’s daycare technician soon changed perspective. “‘You know what? We’ve got to step up. We can’t find excuses.’ She is one of my strongest proponents now,” Mr. Schembri recounted.

He’s had as little as two children to as many as 11. By Week four, he said things were going well. By then, he could plan around a number of staff willing and able to work and a generally stable number of children attending, mostly the same children, and averaging 10 a day. It would be a different story, he said, if the number of children were to grow. “It hits people that these daycares are open to take care of the kids whose parents are essential workers,” he said. “Generally, people wouldn’t think of it themselves: that these daycares are an essential service support.”

Principal David Lee of Westmount Park Elementary School described it like the first day of school. “We don’t know the kids who register, so it’s like starting a new school year where staff have to get to know the students from Day 1,” he said, adding that anxiety levels are high, so it can be challenging to get staff to work.

Mr. Lee says that what is working well is having a strong team,   “who are able to improvise and set up activities on the spot, not necessarily having planned anything. It’s not just about keeping the kids busy – it’s about keeping them engaged and excited about whatever activity the educators are doing with them.”

With only two days to prepare, Mr. Lee opened the daycare centre at his school’s south campus. They started with two children, “but that quickly grew to 13 to 16 kids on a given day,” he said.

Mr. Lee hopes people remember that daycare workers play a crucial role during the pandemic. “We are certainly looking at front-line healthcare workers as essential in the fight against COVID-19, and I think sometimes we forget the essential role non-healthcare workers are playing in this fight,” he said. “That definitely includes our daycare educators and childcare workers all across Quebec who risk their own health to come in to work to care for the children of essential workers. Our educators and childcare workers who come to work in our emergency daycares are true team-players and troopers, and our school and board administrators want to thank them all, whole-heartedly, for their service.”

In acknowledging the EMSB employees who staff these centres, Director General Ann Marie Matheson said: “I would like to extend my sincere gratitude to these daycare teams (Principals, Technicians, Educators and Caretakers) who are keeping the emergency services open. I appreciate the work that you do and the sacrifices that you are making – such that the doctors, nurses and other essential workers are able to go to work because they know that their children are being well looked after in your capable and caring hands.”

Another pioneer when the emergency daycare centres first opened on March 16 was Cedarcrest Elementary School. Its principal Elena Zervas described the precise measures that dictate how a daycare can be run in conditions that require strict social distancing and stepped-up hygiene protocol. Her description of morning registration sounds like a finely tuned process that involves a carefully set up table for the principal and daycare worker to sit apart to do attendance, verify identities and eligibility. Children have their temperatures taken at registration (and also at lunch and before they leave.) They are taken to have their hands washed before they place their belongings in spread-out lockers.

Classrooms are set up so that desks are spaced out, and if more than eight students have registered, another classroom opens up, she explained. Students don’t share toys, and these are wiped down, along with the desks, several times a day. Hand washing is often and has become part of the “daily activities,” explained Ms. Zervas.

On average, the Cedarcrest team has between six and 10 students attending and most are “regulars.” One of the challenges at the beginning was finding enough workers. Some had medical conditions that did not clear them to come to work. There was also the generalized anxiety felt by some staff members – some with their own children at home or elderly parents in their care - around being exposed to the virus and bringing it home, Ms. Zervas said. “Yet, even with all this, my staff reports to work with a smile as they greet the children every day.”

Things are running smoothly now, Ms. Zervas reports, despite the challenge of developing a system that involves collaboration from so many teams from different schools. It is the result of the constant collaboration between the EMSB, the school administrators, their daycare teams, the child care workers and the caretaking staff. Communication is constant, day and night, she said.

“The daycare employees, child care workers, behaviour technicians and caretakers in our Emergency School Daycares are amongst the unsung heroes of this pandemic,” said Ms. Zervas. “Due to their dedication, they go to work in order to look after and care for children, so that their parents can provide essential services to the general population. It is due to their willingness to support their community and aid in the fight against this pandemic that people who work in essential services are permitted to go to work every day, knowing that their children are being cared for and kept safe. I am very proud of my colleagues and wholeheartedly thank them for their unwavering support. Times like these bring people together, and I have never been more proud to be a part of the EMSB family.”

Silvana Crigna, principal of St. Monica Elementary School in NDG, said the daycare centre set up at her school has seen anywhere from eight to 16 children. The shifts her staff assume are more spread out now – a positive change, she notes. How was the first week when it first opened, and St. Monica employees were the only ones staffing the daycare? “It was a big week, but we got through it!” she said. “It was a matter of getting organized and figuring out what the needs were. I anticipated a lot more students that week. I had people on standby in case the numbers spiked.”

Many parents are appreciative of the service, said Ms. Crigna. Using EMSB’s trademark daycare model, BASE, in its emergency daycare service, Ms. Crigna said with fun mix of educational and recreational activities, one of the first and most hesitant students to attend “couldn’t wait to come back” the next day. She also spoke about the work caretakers do. Though only one section of the building is open, they disinfect high-touch areas on the hour. Doorknobs, handrails and sports equipment such as balls and mats are wiped down by one of the two caretakers on duty each day. On rotational shifts as well, these building custodians work to “keep on top of disinfecting,” she said.

Of her whole team involved, Ms. Crigna said “It is comforting to know that we are able to do our part in providing the service so that the essential service workers can have peace of mind that their children are taken care of. We owe them great gratitude for continuing to do what they do each day - know that we appreciate you.”